The Mount Carmel Health Sciences Library was for many years known as The Mother M. Constantine Memorial Library, named in honor of Mother M. Constantine (Ryan), CSC, whose dedication to and love of Mount Carmel extended over a 30 year period. Some of the positions she held at Mount Carmel included Controller (1931–1936), Administrator and Religious Superior for two terms (1936–1943) (1951–1957), and Provincial Superior, Eastern Province of the Sisters of the Holy Cross for two terms (1943–1951) (1957–1962). According to The Mount Carmel Bulletin it was her "guiding spirit" and constant "awareness" that influenced the expansion of the hospital and led to the development of new educational programs throughout the Mount Carmel community, including the continuous improvements made to the library.

The expansion and merging of the libraries

During the 1950's, there were three separate libraries: The School of Nursing Library, the Physicians' Library, and the Convent Library. After new construction was completed on the Mount Carmel Hospital, a group of physicians began planning for a new "physicians' library." With their generous support, textbooks and periodical were purchased. In 1952 Mother Constantine noted, "The Medical Library at Mount Carmel opened April 25, is one of the most beautiful and best equipped in the city. The walls are entirely paneled in vertical grained white oak with built in shelves for 2000 volumes."

Throughout the 1950's, major efforts improved and expanded the library services. In a clipping from the Organizational Manual of Mount Carmel Hospital, the library staff and committee members felt the "necessary value of an up-to-date, well stocked professional library." Furthermore, "with the expanding facilities, a greater number of research problems can be undertaken." 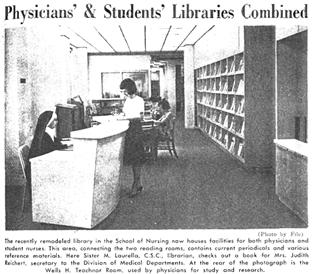 Shortly after Mother Constantine's death in October 1962, another library expansion improvement project was nearly completed. According to The Mount Carmel Bulletin, "Mount Carmel Hospital's improvement and expansion program has successfully completed many important projects. The new Mother M. Constantine Memorial Library facilities, including the Wells H. Teachnor Memorial Room, were opened within recent months and reveal a beautiful library which will serve the physicians and nursing students."

A group of physicians suggested that the library's name be changed to The Mother M. Constantine Memorial Library in honor of Mother Constantine, whose dedication to the Mount Carmel Community was instrumental in improving and expanding the library facilities.

In 1964 the entirely new Mother M. Constantine Memorial Library was installed. The new library had air conditioning and a special room for physicians known as the Wells H. Teachnor Room, named after a Mount Carmel surgeon of outstanding merit. An archival narrative from the Mount Carmel College of Nursing indicated that the Physicians' Library was combined with the School of Nursing Library on the second floor of Mount Carmel Hall. 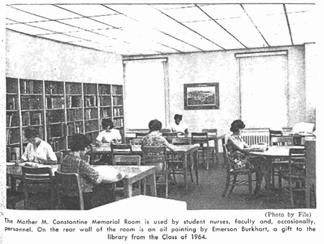 As stated in the archival narrative: "The new quarters include a reading room with a seating capacity for over eighty persons, a periodical room, an office, and a workroom. Space formerly occupied by two rooms on the west side has been converted into a stack room. This new library has a collection of over 5000 books."

The library did not always have modern luxuries, such as air conditioning or multiple rooms for different library functions. In 1951 Sister Kathryn Callahan, CSC, first came to Mount Carmel as a freshmen nursing student. According to Sister Callahan, the nursing library was very small before the merger with the Physicians' Library.

Sister Callahan remembered that Mother Constantine "kept the best interests of Mount Carmel in her deliberations and actions. I was privileged to know her from 1948–1962 in her capacity as Eastern Provincial Superior as well as Administrator and Religious Superior at Mount Carmel." Sister Callahan served as Director of Archives & Records of the Sisters of the Holy Cross, Saint Mary's College in Notre Dame, Indiana until her death on May 10, 2012.

Changing with the times 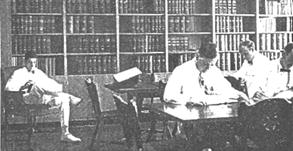 Between 1950 and 1970, the library collection expanded to meet the needs of a growing library clientele and to make available the most current medical information. In the Annual Report, 1950–1951, the Physicians' Library contained a total of 338 books and 34 periodical subscriptions. By 1970 there were a total of 1150 volumes, including subscriptions to 75 medical journals. Throughout the years, the generous contributions of the Mount Carmel physicians built and enriched the library's collection.

During the 1970's, the library introduced audio equipment to accommodate the changing educational needs of medical and nursing students. The Mount Carmel Hospital News–Bulletin of October 1970 reported plans for "a separate room contiguous to the library with full facilities for audio and visual education in connection with medical literature." 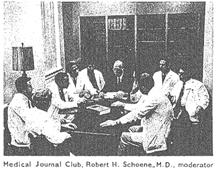 Medline, The National Library of Medicine's premier bibliographic database, was in use at the library during the 1970s. Even before modems and high speed connections were invented, the library used a dial up connection and an acoustic coupler to access medical databases. During the early 1980s, a piece of equipment called the Telefax was used in the library. The Telefax was a telephone connection with a revolving cylinder to which paper was attached to send and receive transmissions, usually in the form of text documents.

During the mid-1980s, the name of the library changed to emphasize that the library served the entire Mount Carmel community. The gradual transition from The Mother M. Constantine Memorial Library to The Mount Carmel Health Sciences Library was done with little fanfare. Although the name was new, people still associated the library with Mother Constantine, as they do to this day.

The library on the second floor of Mount Carmel Hall served the Mount Carmel community for many years. However, the facilities became outdated, especially with the advent of the information age. In 2004, the century-old building was demolished to make way for the Center for Learning and Education. 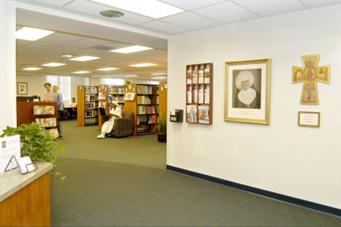 The Mount Carmel Health Sciences Library is located on the same spot where it has existed for over 40 years, now occupying the third and fourth floors of the Center for Learning and Education. Thanks to the generosity of our community, funds were raised to build the new state-of-the-art medical and nursing educational facility. The late Wilby S. Cowan, an attorney in Columbus, left his $2.4 million trust fund to Mount Carmel Foundation to help establish the new health sciences library. Near the library entrance is a memorial plaque that reads, "In Grateful Recognition to Wilby S. Cowan." 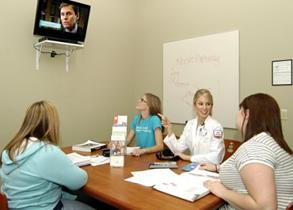 The library includes innovations such as multiple computer workstations with access to thousands of full-text medical, nursing and allied health articles, including wireless and remote access to full-text resources available to the entire Mount Carmel Community. The extensive floor space, comfortable furniture and study rooms equipped with multimedia educational equipment provide an ideal atmosphere for work or study. Perhaps just as important is the highly trained library staff prepared to answer any questions or to provide assistance when needed.

Over the past 50 years, the Mount Carmel Health Sciences Library has evolved into a highly functional facility that serves the learning and educational needs of Mount Carmel associates. It was fortunate that Mother Constantine, with her vigilance and strong business acumen combined with her warmth and insight, kept Mount Carmel and the library moving forward. In Memoriam to Mother M. Constantine dated February 1963 stated, "Although her long association was with the traditional type of hospital, Mother was impressed with the need in a modern institution for an automated approach and adopted this wholeheartedly."